What is Kundalini energy? 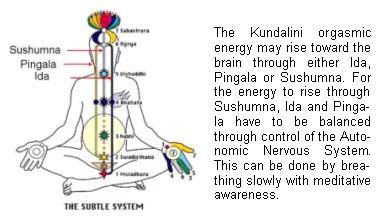 Kundalini is a dormant energy within most people. In  Hindu mythology, Kundalini is a serpent goddess who lies asleep at the base of the spine, coiled three and a half times around the first chakra.Her name is Kundalini Shakti, and she represents the unfolding of the divine Shakti energy, the energizing potential of life itself, a living goddess who enlivens all things.
Under certain circumstances, the Kundalini energy awakens and begins to rise through the body, piercing and opening the chakras as she moves in her undulating, snake-like fashion. As Kundalini releases stored and blocked energies, her movement can be quite intense, sometimes painful, and often leads to mental states that seem out of this world.
Circumstances that stimulate Kundalini awakening are many and varied, but are usually triggered by such things as extended periods of meditation, yoga, fasting, stress, trauma, psychedelic drugs, or near death experiences.
Kundalini is a condensed, primal force, similar to the potential energy found in water. When released, it creates a vertical connection between the chakras by opening the subtle channels known as nadi, most specifically, the central channel that moves up the spine called sushumna. If we put water through a small hose at very high pressure, the end of the hose will undulate like a snake. Similarly, the intense energy of Kundalini undulates in the body as it rises through the chakras.
Kundalini can also be seen as a result of the chakras connecting to each other.Theoretically, as the chakras enlarge, the spinning of one can enchance the spinning of the one above or below it.
Kundalini is basically a healing force, but its effects can sometimes be quite unpleasant. Such effects may last for minutes, days, months, or even years.
If you find yourself dealing with uncomfortable Kundalini awakening symptoms, you should:
1) Purify the body. Abstain from recreational drugs, tobacco, alcohol, and caffein, prescription drugs. Avoid food additives, high sugars, or greasy foods. Eat well, especially protein which is generally grounding. Get massage and vigorous exercise.
2) Reduce stress. If you are in for a major spiritual transformation, make time for the necessary changes in your life. You may need to devote more time to your spirituality or health.
3) Find Support. Find other who have knowledge of this experience.
4) Educate yourself. Read about Kundalini, Kundalini awakening,Yoga and learn about Chakras.
5) Treat underlying psychological issues. As Kundalini brings up unresolved issues, this is the best time to deal with them. It will make the ride smoother.
6) Examine your spiritual practices. If you have not been practicing meditation, yoga or some spiritual practice, it may be time to begin. You might need to stop meditating for a while if it increases unpleasant Kundalini awakening symptoms. See what increases or decreases the unpleasant effects.
7) Practice grounding. Kundalini is most difficult when the energy is moving upward without enough energy moving downward to balance. Investigate the possibility of the first chakra issues that need to be resolved in order to give a firmer base.Practice grounding exercise daily.
Kundalini energy is released also during orgasm through the second chakra, as the body attempts to create a child. During life-threatening situations, the kundalini energy is also often released. This is how people suddenly have the superhuman strength to save themselves or a loved-one. Most of us have heard about the grandmother who had to lift a car to save her grandchild. Her kundalini was released, giving her the power to do what she needed to do. Long ago, some yogis discovered that the kundalini can be used to move very quickly into higher states of consciousness. By meditating on the chakras, the kundalini is activated and begins to rise.
The kundalini is coiled up like a very tight spring, and when released there is sometimes an explosion of power. Properly directed, the kundalini will travel up a tube in the energy body that lies close to the spine. Without proper direction, the release of kundalini can be very uncomfortable and possibly damaging. (This is why it is very important to study kundalini yoga with an experienced guide.)
On it's way up, the kundalini both cleans and strengthens the energy body and chakras. You may feel a warm sensation moving up your back. If your head feels like it's burning, you may be pushing too hard, too fast--be sure to consult with your teacher.
You could think of kundalini yoga as a way of tapping into a natural storage of power that we all have to fuel your practice. Like the gasoline you put in your car, kundalini by itself is relatively harmless but when combined with will power, it can become volatile if not handled with respect.
The excellent animation below shows the Kundalini energy raising: